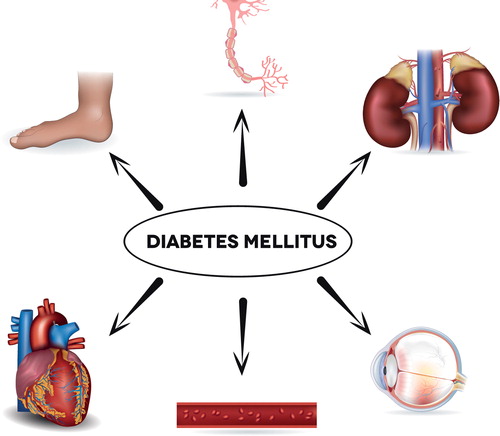 What do you mean by Diabetes Mellitus?

Its a condition of high glucose level in your blood which also leads to glucose excretion in urine.

Glucose enters into our cells when our hormone insulin, binds to cells. Due to genetic or some environmental reasons, such glucose entry doesn't occur even after binding of insulin to the cells (also known as INSULIN RESISTANCE). In some cases there may be deficiency of insulin itself. In both these instances glucose doesn't utilize by our body and ultimately leads to rise in glucose level in our blood which is known as Diabetes Mellitus.

What can happen if your blood sugar remains too high?

Our important organs like Heart, brain, kidney, eyes, foot are more vulnerable to get damage by high blood sugar level which are described in details as shown in image.